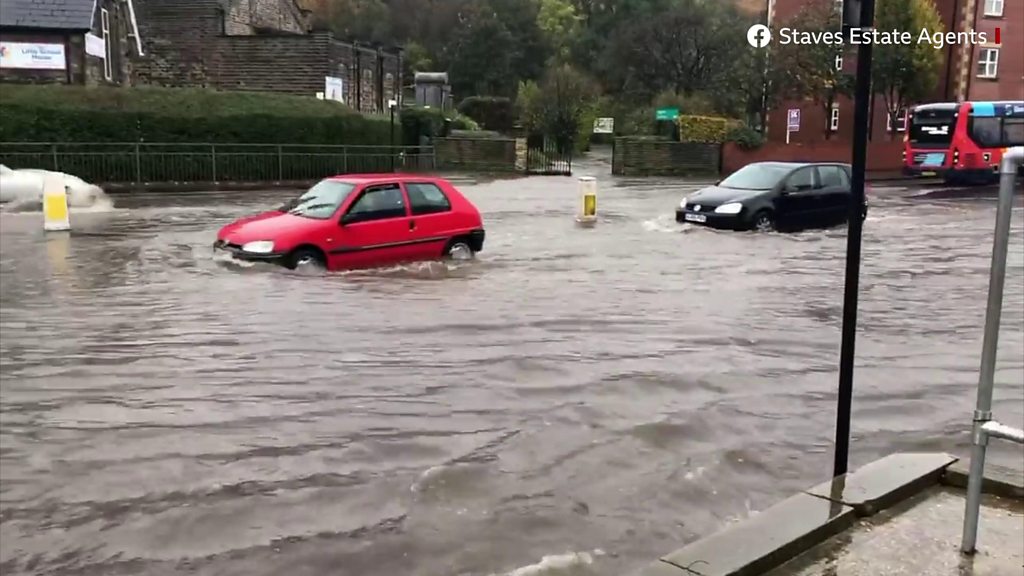 Heavy rainfall has left the streets of Sheffield flooded and hundreds of people stranded in a shopping centre.

One emergency contractor described the rain in South Yorkshire as “not far from biblical”.

The slipway on the M1 at junction 34 was closed and shoppers became trapped in the Meadowhall centre.

Elsewhere, 35 homes in Mansfield, Nottinghamshire, were evacuated at about 17:00 GMT following a mudslide caused by torrential rain.

Fears about rising river levels on the River Ryton in Worksop, Nottinghamshire, has led to residents of Central Avenue being advised by the fire service to leave their homes.

On Facebook, Bassetlaw District Council said an emergency rest centre had been set up at Worksop Leisure Centre for all those affected.

Across Yorkshire, heavy rain is forecast until 03:00 and Sheffield Town Hall will be open through the night for people stranded by the floods, which have caused widespread disruption across northern England.

There are about 100 flood warnings in place across the country, with South Yorkshire one of the worst affected areas.

Flooding of property and roads is expected and residents are being advised to put any flood plans into action.

Barnsley Council’s highways team has been called to Wombwell, after reports Station Road has been affected by severe flooding.

Emergency contractors are working at “full capacity” to prevent further flooding with a “full emergency service” running across Sheffield.

Council officials said the flooding was likely to continue into Friday, affecting the morning rush hour.

“The rain is going to get worse again tonight,” Councillor Mark Jones said.

“We have a full emergency service running and we are monitoring the situation as best we can but we are inundated.

“It’s all hands on deck, everything is being activated and mobilised but the fire service and council contractors are working at full capacity.”

Darren Butt, of emergency contractors Streets Ahead, said: “The situation is not far from biblical, it is very frustrating for the traveller but we are dealing with a big volume of water, it is very slow and frustrating.”

South Yorkshire Police said the area around Meadowhall became gridlocked because of the conditions.

The shopping centre, just off the M1, was due to host its Christmas Live event on Thursday featuring acts including Ella Henderson, Tom Zanetti, Jonas Blue.

But it was called off at the last minute amid a torrential downpour.

Ian Margerison, one of those trapped at Meadowhall, said on Twitter he feared he might be “camping” there all night.

Police originally advised shoppers not to leave amid the deluge.

But at about 20:45 the force tweeted to say people were being “supported to leave” the centre.

Harmony Harrop, 14, was one of the hundreds of people trapped at the centre.

She said: “We have been talking to security and they said it wasn’t safe to go outside.”

Harmony said one of her friends had called her father but due to the traffic problems, he had spent four hours trying to reach the shopping centre.

Grandmother Olive Wilson, 69, from Barnsley was at Meadowhall with her family when they became trapped.

She said she and her family were looking at staying at a nearby hotel if they were unable to travel back to Barnsley.

Speaking to the Sheffield Star, a spokesman for the shopping centre said people were welcome to stay for their own safety.

“For anyone who prefers to stay with us in the centre they are very welcome to do so,” he said.

“We encourage everyone to stay safe in these extreme weather conditions.”

BBC Yorkshire climate correspondent Paul Hudson said the rain should start to ease after midnight in South Yorkshire, but persist in parts of East Yorkshire and Lincolnshire overnight.

Heavy rainfall has also closed several roads in Leicestershire, while homes at Whiston near Rotherham have also been flooded.

The A1 northbound is closed between B6325 Great North Road (North Muskham) and A6075 Ashvale Road (Tuxford Junction, Tuxford) in Nottinghamshire.

One lane of the M1 southbound has been closed, between junction 40 near Ossett and 39 at Denby Dale.

Flooding has forced the closure of lines between Sheffield and Gainsborough, Sheffield and Lincoln and Hebden Bridge and Manchester Victoria.

Rotherham Central and Kiveton Park railway stations are also closed, with all lines between Todmorden and Rochdale blocked. Trains are also not stopping at Hadfield in Derbyshire.

Are you in an area affected by the floods? If it is safe to do so, share your experiences by emailing haveyoursay@bbc.co.uk.

Please include a contact number if you are willing to speak to a BBC journalist. You can also contact us in the following ways: