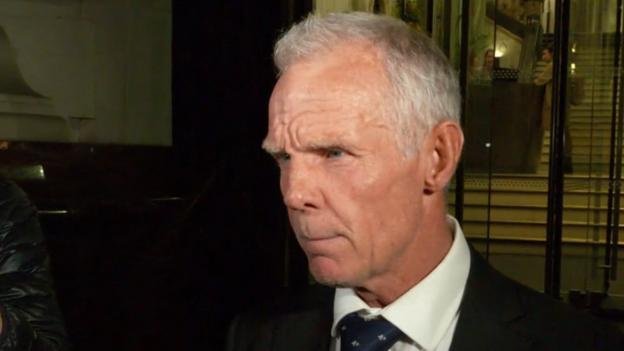 Dr Freeman alleges the testosterone he ordered to British Cycling headquarters in 2011 was on behalf of Sutton.

In staggering, confrontational exchanges between Sutton and Dr Freeman’s lawyer, Mary O’Rourke QC, Sutton repeatedly denied this and her claim he doped during his racing career.

A livid Sutton then left the tribunal in Manchester after calling Dr Freeman “spineless”.

An official could not persuade Sutton to return and he is set to decide on Wednesday whether he will resume giving evidence, as planned, on Thursday.

The tribunal is set to resume at 11:30 GMT on Thursday, with Wednesday a planned day off.

Former British Cycling and Team Sky medic Dr Freeman is facing an allegation he ordered 30 Testogel sachets to the National Cycling Centre in May 2011 knowing or believing it was intended for an athlete to enhance performance, which he denies.

Sutton’s highly anticipated first appearance at the tribunal started at 14:00 after a day-and-a-half delay because of private legal argument.

Dr Freeman has admitted to 18 of the 22 allegations against him, including that he asked supplier Fit4Sport to falsely claim the Testogel had been sent in error.

In a public session before Sutton gave evidence, Miss O’Rourke said the defence’s case is that Sutton is a “habitual and serial liar” as well and “a doper, with a doping history”.

During a remarkable afternoon session on Tuesday:

After around two hours of increasingly hostile exchanges during Miss O’Rourke’s cross-examination on Tuesday, Sutton announced he was leaving the hearing and departed with an extraordinary outburst.

Despite calling Dr Freeman a “good friend”, Sutton made a series of claims about his former colleague and called him “spineless” for sitting behind a screen as Sutton gave evidence.

“I’m going to leave the hearing now, I don’t need to be dragged through this,” said Sutton.

“I’m going to go back to my little hole in Spain, enjoy my retirement, sleep at night knowing full well I didn’t order any [testosterone] patches.

“The person lying to you is behind the screen, hopefully one day he will come clean and tell you why. He’s a good bloke, a good friend, I’ve no argument with him.

“I’m happy with what I achieved in my career, I wish Richard Freeman all the best going forward, no one is better bedside than him.

“Dr Freeman went through a messy divorce, he turned up to work drunk on several occasions – he was like the Scarlet Pimpernel.

“I covered for him when we couldn’t get hold of him.

“I’m not lying, I’ve told the truth, don’t ask me any more questions.

“I’m not getting dragged by this mindless little individual [O’Rourke] living in her sad world, who is defending someone who has admitted to telling a million lies to you and the rest of the world but can’t come out and tell the truth.

“He is hiding behind a screen, which is spineless, Richard, you’re a spineless individual.”

Miss O’Rourke said on 7 November she would attempt to question the “integrity and credibility” of Sutton and earlier on Tuesday said she had 100 questions planned for him.

Only three questions in, Sutton became impatient, stating his former career as a rider was “irrelevant”, as were other questions about his level of knowledge of doping practices in cycling history.

Sutton directed his ire at Miss O’Rourke, asking for “an apology” for her claims and at one point asking, “Am I the one on trial here? I feel like I’m the criminal.”

When Miss O’Rourke put it to Sutton that his claim he did not know what Testogel was until asked about it by UK Anti-Doping in 2016 was either him “having a laugh” or a “blatant lie”, Sutton replied: “There is only one joke in this room and that’s you.”

He also turned to the press gallery at one stage and said: “I hope you are getting all this.”

Sutton added there was “nothing sinister” in him telling the General Medical Council’s legal team that he and former British Cycling chief Sir Dave Brailsford were worried about being involved in this case and it was only because “the buck stops with you” as the head of an organisation.

Before Sutton’s appearance, the independent medical practitioners tribunal ruled that the general topic of erectile dysfunction could be the subject of questions to him in public.

Yet Sutton brought up the subject before Miss O’Rourke could ask, shortly before he stormed out, adding: “I would have no problem telling the GMC it was for me, but I never ordered it.”

If Sutton chooses not to return to the hearing on Thursday, Miss O’Rourke is hoping to call former British Cycling head of medicine Dr Steve Peters for cross-examination.

Sutton said Dr Peters had “phoned me the other night” and will “verify everything I’ve had to say”.

The testosterone delivery was brought to Dr Peters after former physio Phil Burt, who is due to give evidence on Friday, discovered it.

Dr Peters has claimed Dr Freeman contacted supplier Fit4Sport the same day the order arrived to confirm it was sent in error and Dr Peters said he then asked Freeman to return it.

Dr Peters said he was satisfied after being shown an email from the supplier “confirming” that the Testogel had been returned and destroyed, which Dr Freeman now admits was false.

The hearing, which is to determine Dr Freeman’s fitness to practise medicine, continues.

How Jarvis Cocker made an isolation anthem by accident

International Nurses Day: The gran, mum and daughter on the front line