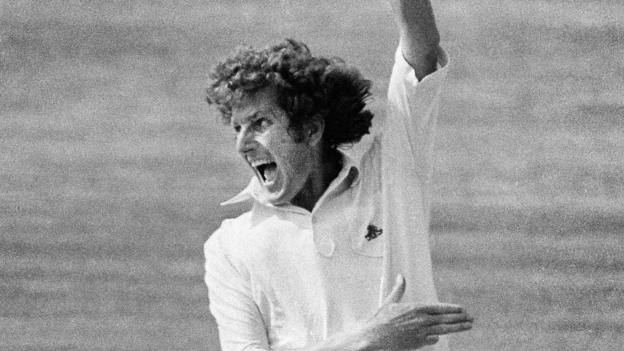 Former England captain Bob Willis has died at the age of 70.

He captained England in 18 Tests and 29 one-day internationals before his retirement from all forms of cricket in 1984.

In a statement, Willis’ family said he had died “after a long illness”.

“We are heartbroken to lose our beloved Bob, who was an incredible husband, father, brother and grandfather,” the statement continued.

“He made a huge impact on everybody he knew and we will miss him terribly.”

Willis subsequently worked as a summariser on BBC TV before joining Sky Sports as a commentator in 1991.

He continued to work for Sky and was part of their coverage of this summer’s Ashes series.

The England and Wales Cricket Board said it was “deeply saddened to say farewell” to a “legend of English cricket”.

“We are forever thankful for everything he has done for the game,” it added. “Cricket has lost a dear friend.”

Willis represented Surrey for the first two years of his professional career before spending 12 years at Warwickshire, finishing with 899 wickets from 308 first-class matches at an average of 24.99.

In a statement on Twitter, Surrey said the club was “devastated” by the news of Willis’ passing.

The Sunderland-born bowler made his international debut aged 21 in the 1971 Ashes after being called up to replace the injured Alan Ward and played the final four Tests of the seven-match series as England won 2-0.

Despite needing surgery on both knees in 1975, he became one of the finest fast bowlers of his generation, playing another nine years and claiming his 325 wickets at an impressive average of 25.20.

The pinnacle of Willis’ international career was arguably the stunning 18-run victory against Australia in the third Test of the 1981 Ashes at Headingley.

England, trailing 1-0 in the series, were forced to follow on and needed Botham’s spectacular 149 not out to force Australia to bat again, setting them 129 to win.

With his Test career on the line, Willis produced a devastating spell, taking a Test-best 8-43 as Australia were dismissed for 111 – the hosts at one point being 500-1 outsiders to win.

England went on to win the series 3-1 and Willis finished with 29 wickets at 22.96 in six matches.

Willis, who was named in England’s all-time Test XI in 2018, was appointed captain for the 1982 India tour of England after Keith Fletcher was sacked.

He oversaw a weakened team during his tenure, after the likes of Graham Gooch, Geoffrey Boycott and Derek Underwood were banned from international cricket for three years from 1982 for taking part in a rebel tour to South Africa.

He finished with a record of seven wins, five defeats and six draws from his 18 Tests in charge before he was sacked and replaced with David Gower prior to what proved to be Willis’ final Test series against West Indies in 1984.

Willis made his ODI debut in 1973 and played in the 1979 World Cup but sustained a recurrence of his knee injury in the semi-final win over New Zealand and missed the final, which West Indies won by 92 runs.

He captained England at the 1983 World Cup where his side were beaten by eventual winners India in the semi-finals.

Willis moved into commentary soon after his playing career ended and worked alongside former team-mates Botham and Gower.

After moving away from live commentary and summariser duties in 2006, Willis continued to work as a pundit on Sky Sports programmes such as The Debate and The Verdict.

He was frequently firm in his criticism of current players, which was seen by some as being unfair.

Yet Willis also played up to his persona and had a humorous side, telling current captain Joe Root he would “have you back in the dock” with bared teeth after the England batsman’s impersonation of Willis during the 2015 Ashes.

LeBron calls out Manfred: ‘Listen to your players’