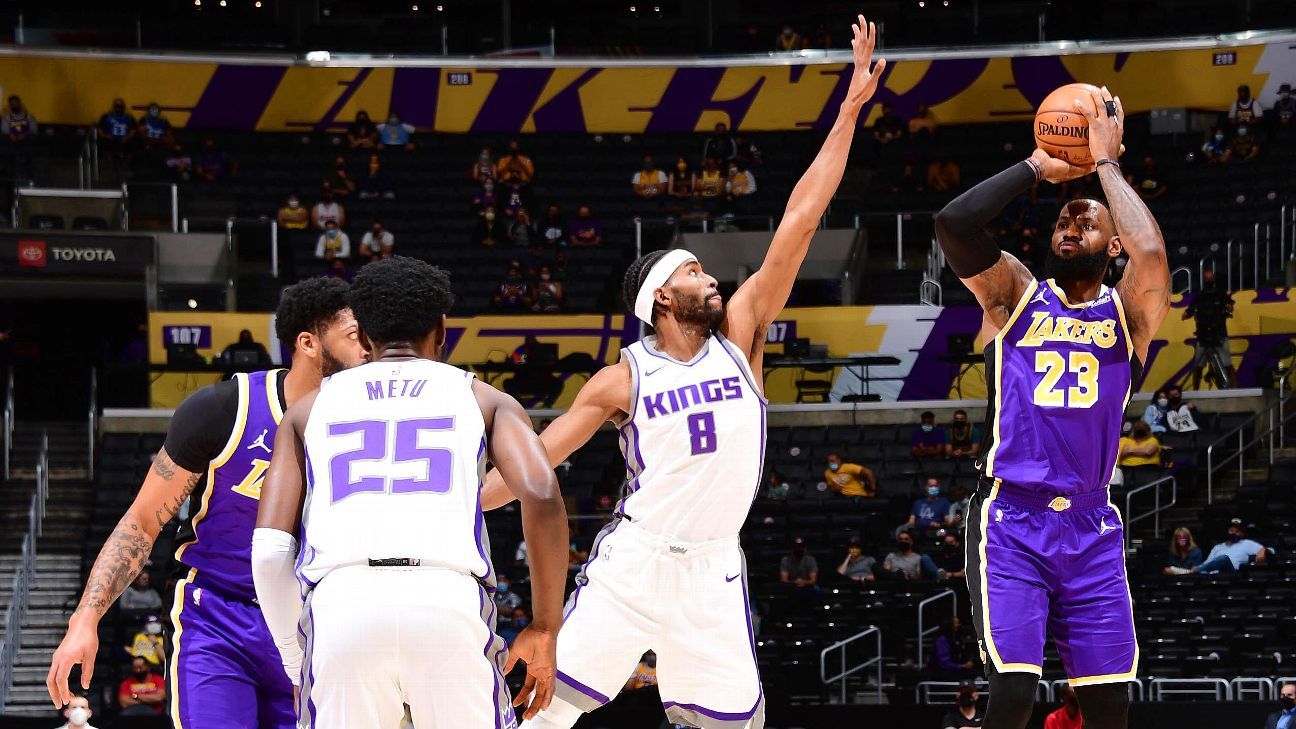 LOS ANGELES — LeBron James paused his pregame free throw routine and stood still just inside the foul line on Friday when he flexed both arms, tilted his head back and let out a guttural roar.

After the longest injury-related layoff of his career — sitting out 20 games in six weeks because of a high ankle sprain to his right leg — James was indeed back.

Fittingly, he found himself with the ball in his hands with a chance to win the game, but his 3-pointer with 2.7 seconds remaining missed and the Los Angeles Lakers lost 110-106 after the Sacramento Kings tacked on a pair of free throws.

The miss marred an otherwise solid return, as James finished with 16 points on 6-of-12 shooting, 8 rebounds and 7 assists with 2 steals and 5 turnovers in 32 minutes. His plus-minus of plus-5 was the best of any Lakers starter.

As James shared postgame pleasantries with Kings players, a fan’s shout could be heard from the stands: “We love you, LeBron!”

It was reminiscent of the moments before tipoff when James was the last Lakers player announced in the starting lineup. His scream was matched soon after by a cacophony of cheers from the couple thousand fans in attendance. The Lakers’ game against the Kings didn’t just mark James’ comeback, but it was also the first time he played in front of the home crowd since leading L.A. to the championship last season.

While Lakers coach Frank Vogel cautioned, understandably, “obviously, you have to expect some rust,” when asked about James before the game, the 36-year-old forward mostly stood out for his acumen, not because of any atrophy — at least in the early going.

With the clock ticking down in the first quarter, James called for a clearout and drove from beyond the 3-point line to the cup, showing his signature burst as he scored on a double-clutch layup with 1.9 seconds left while being fouled by the Kings’ Maurice Harkless.

Then he went into Lakers legend Kareem Abdul-Jabbar’s bag in the second quarter and scored on a sweeping hook shot to knot the game at 34-34. The bucket brought L.A. all the way back after it trailed by as many as 15 in the opening frame.

Early the fourth quarter, with Sacramento threatening, having cut L.A.’s 11-point lead down to seven, James backed Harkless down and scored on a step-back, fadeaway jump shot — displaying precision in his footwork and a shooter’s touch on his hoist that belied his month-and-a-half absence.

After a quick rest, during which the Kings came all the way back to tie it up, James checked back into the game with five minutes, 16 seconds remaining for the homestretch.

It was a mixed bag for the 18-year veteran from there.

James’ turnover with 3:54 left, losing his dribble in the face of routine pressure from Terence Davis on the perimeter, and then following that by turning it over on the Lakers’ next possession, trying to thread a pass to Anthony Davis in the corner, allowed the Kings to go up 101-97.