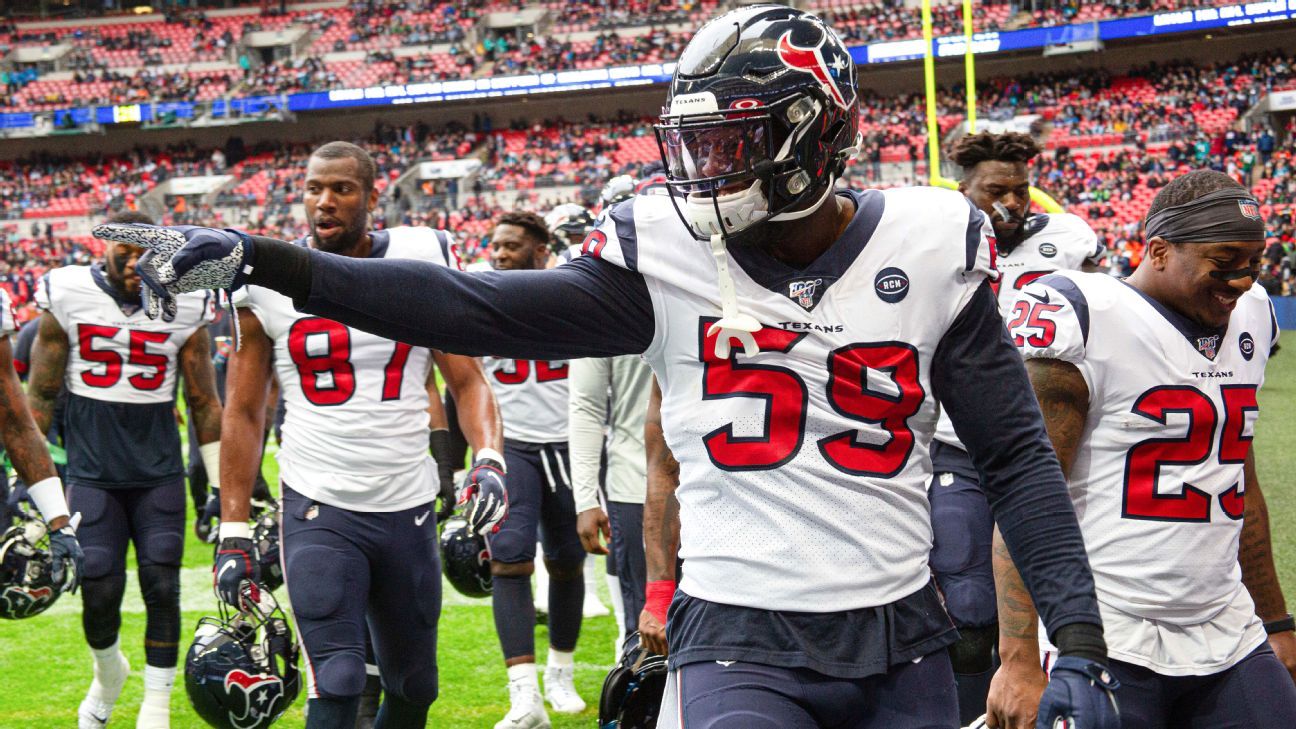 GREEN BAY, Wis. — The Packers are turning to another veteran player who was recently released in an effort to help their banged-up defense. This time it’s former Houston Texans edge rusher Whitney Mercilus.

A source told ESPN’s Jeremy Fowler on Wednesday that Mercilus was signing with the Packers. It comes two weeks after the Packers signed former Dallas Cowboys linebacker Jaylon Smith, who made his Green Bay debut on Sunday against the Bears.

Mercilus, who was released by the Houston Texans on Tuesday after spending 10 seasons with that franchise, turned down more money elsewhere to join Green Bay’s defense, the source said.

The Kansas City Chiefs were also in the mix for Mercilus, who had guaranteed money owed to him as part of his Texans deal, a source told Fowler.

“Nothing’s official,” Packers coach Matt LaFleur said Wednesday. “Until then, I’m not going to say much about it.”

When asked whether it will soon become official, LaFleur said: “We shall see.”

The Texans released the 31-year-old first-round draft pick in 2012 on Tuesday. This was his first year in Lovie Smith’s defense, which saw him move from outside linebacker to defensive end.

In six games for Houston this season, Mercilus has three sacks, four tackles for a loss, three quarterback hits and 12 tackles.

His 57 sacks in 10 seasons for the Texans rank second in franchise history behind J.J. Watt, who had 101 sacks with Houston.

The Packers were already without Pro Bowl outside linebacker Za’Darius Smith, who played 18 snaps in the season opener and then underwent a back surgery that has him out indefinitely. They then lost their other top outside linebacker, Preston Smith, in Sunday’s win at the Chicago Bears. He played only eight snaps before he left with an oblique injury.

The Packers also lost outside linebacker Chauncey Rivers to a season-ending knee injury earlier this month. Preston Smith has never missed a game in his NFL career, suiting up for and playing in 102 straight regular-season games.

“I think it’s one of those deals that we’re going to give him the week and see where he ends up,” LaFleur said of Preston Smith’s availability for Sunday’s game against Washington. “Certainly we’re hopeful to have him. He’s a big part of our defense. I know he’s motivated to want to get out there and he’s done such a great job. He’s been physical, he’s been disruptive both in the run and the pass game. He’s provided great leadership out there, so certainly we’d love to have him back. But we’ll see as the week plays out.”

The Packers on Wednesday also opened the three-week window in which left tackle David Bakhtiari can practice while remaining on the physically unable to perform list. Wednesday’s workout was his first since he tore the ACL in his left knee on Dec. 31. The Packers aren’t expected to add Bakhtiari to the 53-man roster this week and with a Thursday night game the following week at Arizona, he might not make his debut until the Nov. 7 game at Kansas City.

A PM who lied to Parliament would normally quit – Raab