Clare Mount will always remember the evening of Christmas Day 2003 as “the night that stole my smile”.

On Boxing Day she awoke with Bell’s palsy, a nerve condition that causes paralysis to part of the face.

It affects up to 24,000 people in the UK a year, but charity Facial Palsy UK said a lack of awareness means many still cannot get timely treatment.

The Royal College of GPs (RCGP) Wales said doctors should recognise it and urged patients to seek early help.

Mother-of-one Clare, 40, of Crumlin, Caerphilly county, has lived with Bell’s palsy for 15 years and, at times, it has left her a shadow of her former self.

“It makes me feel awful, it’s devastating and I hide myself from people. I try and act like it doesn’t bother me, but it’s your face,” she said.

“It’s not life-threatening but it is life-changing.”

The housing association worker said people sometimes stare and strangers have called her cruel names, such as “freak”, “tramp” and “Sloth from the Goonies”.

In eight out of 10 cases people recover from Bell’s palsy, with the effects to their face reversing within weeks or months.

In these cases, the patient’s chances of a long-term recovery are greatly increased if they were given steroids within the first 72 hours of the palsy’s onset.

Clare went to the hospital when Bell’s palsy first struck and medics allayed her family’s fears that she’d had a stroke.

She was advised to see her GP but, as her surgery was closed for the festive period, she was unable to get a diagnosis and steroids within the 72-hour window.

“It would have reduced it a lot,” Clare said.

“Every case is different, so it may not have gone away completely, but certainly it would have meant that I would not have to have suffered as much as I have had over the last few years.”

What is Bell’s palsy?

The most common facial palsy, it causes temporary weakness or paralysis of the muscles on one side of the face, with the symptoms varying from person to person.

The weakness on one side of the face can be described as either a partial palsy, a mild muscle weakness, or a complete palsy, which is no movement at all.

Bell’s palsy can also affect the eyelid and mouth, making them difficult to close and open.

It is not known exactly what causes Bell’s palsy but links have been made to viruses.

Symptoms can include a facial droop, pain in the inner ear, chronic pain, difficulty with eating and speaking, and the inability to close one eye.

People with persistent Bell’s palsy can also receive help through additional specialist treatments, such as surgical procedures, Botox and physiotherapy.

Clare said over the years she has been repeatedly referred by GPs to ear, nose and throat services, which have been unable to help. 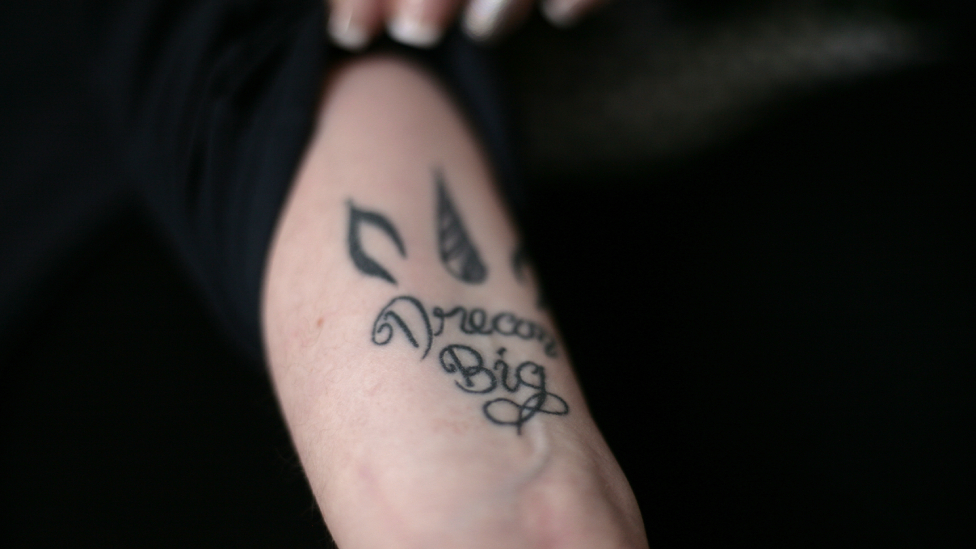 Don’t give up. I’ve had this for 15 years and I haven’t stopped [trying] to find something that will work for me. I always said I was facing my day.

But after getting online advice from another person with Bell’s palsy, Clare recently learned of a specialist facial palsy team at Morriston Hospital, in Swansea, and secured an appointment after passing the information to her GP.

“It was mixed emotions at first,” she said.

“I was very angry that I could’ve had this help 14 years ago, because the doctor had been there that long, but now I just feel that there is a light at the end of the tunnel.”

The advice came from Marcus Horton, 31, of Pembrey, Carmarthenshire; he was an Army sniper based in England when he developed Bell’s palsy in January 2017.

Marcus said he was mistakenly diagnosed with meningitis at first – despite suggesting Bell’s palsy to medics – and by the time his condition was properly identified, it was also too late for steroids.

The father-of-three said it ultimately meant he could not carry on in his dream job and left him suffering physically and mentally as he tried to adjust.

“It’s been quite a bit of an emotional rollercoaster to be honest,” he said.

“I’ve got my down days and it’s hard not to think about the anxiety and depression. It has an affect on me now, [but] not so much as when it first happened.”

Marcus, who now works for a utility company, said anyone who suspects they have Bell’s palsy should be given steroids immediately as a precaution and more specialist treatment centres are needed.

A recent survey of 421 people with facial palsy in the UK found 19% were initially misdiagnosed, while 41.7% said their GP had not known who or where to refer them.

And one in five of those with Bell’s palsy said it took them more than a year to see a specialist, according to the Facial Palsy UK research.

Debbie Byles, a trustee of the charity, said: “The quicker the treatment, the better the outcomes for the patient. The longer it’s left, the harder the symptoms are to overcome.”

Dr Mair Hopkin, joint chairman of the Royal College of GPs Wales, said Bell’s palsy was “fairly well-known” to most doctors and “fairly easy to recognise”, although it can be confused with a stroke.

She said early diagnosis and oral steroids were critical to upping the chances of a long-term recovery but other specialist services may not actually help that much.

“Unfortunately the evidence that any of these additional treatments will make a difference in the long term is very slim,” she said.

“Patients do need to be reassured that, for the majority, they will make a recovery.

Inside a US abortion clinic in its final days